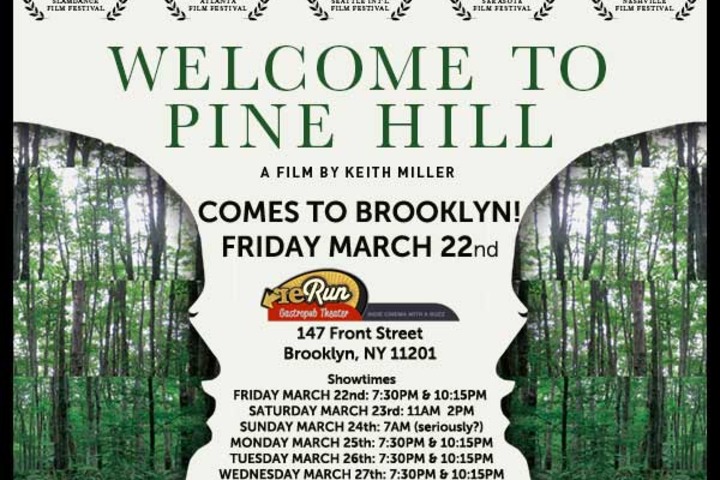 Welcome to Pine Hill at ReRun in Dumbo!

MOSQUITO is the coming of age story of a 13 year-old boy named Cesar, whose awkward bravado and fanciful imagination have earned him the nickname of Mosquito. On a memorable Halloween night in 1974, Cesar will fight to gain the respect of his teenage tormentors. This 12-minute short film, captures the gritty look and feel of NYC in the 1970's through the kinetic, free camera style of Sundance Cinematography Award winner Ferne Pearlstein. The ensemble cast is led by Alejandro Polanco, star of the critically acclaimed film "Chop Shop" (2007).

Join us for an evening of Welcome to Pine Hill co-presented with the Meerkat Media Collective. This collective was essential in supporting the Pine Hill journey, and will screen one of their collaboratively-made short films before the feature.  A post-screening discussion will follow about collaboration in the filmmaking process with Director Keith Miller and members of the Pine Hill team and Meerkat Media.  What dynamic allows for this?  What challenges and pitfalls arise?  How do we draw the line between individual authorship and collective authorship?  How can we leverage shared resources to make our impossible project ideas possible?

THURSDAY MARCH 28th:
6:45pm DOORS / 7:30pm SCREENING
Special screening of short film "The Creek When He Came Back" Q&A with filmmakers to follow.

After Chris abruptly walks out on her boyfriend, she heads to the country with a photographer for an impromptu modeling session near his family home in upstate New York. Chris soon finds that the woods surrounding the property have the uncanny ability to manifest ghostly visions of the past. When the photographer, Danny, leaves to visit his estranged father in a town nearby, the visions intensify and Chris finds herself alone as an unexpected visitor arrives with a daunting favor to ask of her.