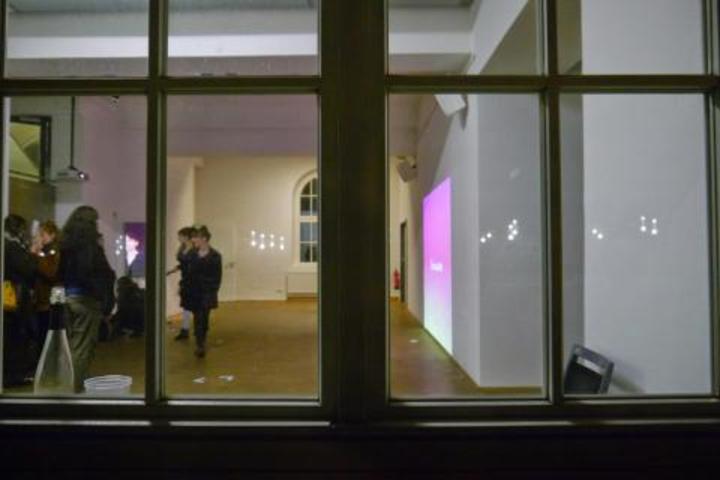 Presented during Berlinale in association with Kassel Documentary Film and Video Festival and with support from Hardware Hack Lab. Aeon Magazine is now streaming the complete film version. In Twitter use #StreetViewsLive.

In a piece that plays with ideas of presence and live art, video artist Annie Berman will open her installation with a real-time broadcast from her Google Glasses. The broadcast documents her own live performance, as she occupies her installation and invites live and virtual interaction from her audience. She will also distribute special masks for viewers who wish to remain anonymous, or at least obscure their faces.

STREET VIEWS is an 8 minute projected video that explores how virtual mapping alters our experience of space, identity, and one another. Set in New York City’s famed West Village, but ‘shot’ within Google’s street view mapping application, STREET VIEWS attempts to navigate a surreal, disoriented new landscape. With humor and a light touch, Berman wanders through the streets of the big city frozen in timelessness, passing by pixelated faces, looking for something human on the digital display.

In its original conception, this piece utilizes a traditional disembodied voice of the narrator. When invited to install this piece in Germany, the artist decided to experiment with the idea of the disembodied narrator as another form of a virtual presence. Using a second monitor, she screens footage of herself delivering the narration, blurring her face to emphasize the virtual nature of this presence. The monitor also is given its own microphone as if it were a person reading at a conventionally staged live performance.

STREET VIEWS is now one of five featured media installations from Kassel’s Dokfest on exhibit at Galerie Patrick Ebesnperger, Berlin. The theme of the exhibition seeks to re-examine the scopes and realities of our present technological age. About HowlRound TV:
HowlRound TV is a global, commons-based peer produced, open access livestreaming and video archive project stewarded by HowlRound: A commons by and for people who make performance. The channel is at howlround.tv and is a free and shared resource for live events and performances relevant to the world's performing arts fields. Its mission is to break geographic isolation, promote resource sharing, and to develop our knowledge commons collectively. Follow and use hashtag #howlround in Twitter to participate in a community of peers revolutionizing the flow of information, knowledge, and access in our field. Our community uses the Creative Commons Attribution 4.0 International License (CC BY 4.0). Become a producer and co-produce with us by contacting @HowlRoundTV on Twitter, emailing tv@howlround.com or by calling Vijay Mathew at +(1) 917.686.3185. Host a watch party and let us know about it. Click here to see past programming.