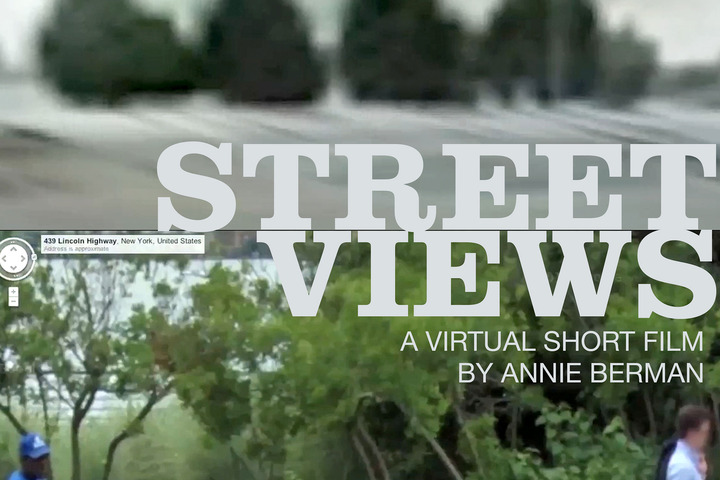 "I used to walk around taking pictures. I now find myself walking around in pictures" says Annie Berman,as a starting point in her video art work named STREET VIEWS. A stroll through frozen moments captured and conserved in a google street view map of West Village in New York City. Gliding through the map, the viewer gets an impression of everyday life street scenes on a sunday afternoon in this exquisite part of New York City, frozen in a moment.

Bermans stroll is accompanied by side stories, that appear like short excursions from the actual route. The words of a doorman she recently met leads the viewer to the residencial building where he works every night. While the "dérive" - as the artist calls her excursion - continues, the virtual eye walks through the streets using big steps. "Click - click - click" is the rather silent and discrete sound of these massive movements. Most of the people passing by along the way don´t know that in the moment of the capturing they become like a virtual sculpture - immortal as part of the virtual world.

"Is the face really our most identifying feature?" asks the voice starting to imagine how these people are, how they might live and what they might be interested in. Passing through the walls of buildings along the way the artist tries to get closer to the people. She is looking for the video store in this virtual world but gets lost by trying to communicate with the things that appear on her stroll. What she wants to get close to, vanishes. The protagonists and things appear and disappear, as the camera can only catch one moment.

Time by time the camera is accidentally reflected by the environment in a window screen or a mirror. A modern and for the person behind the camera perhaps rather unconscious reference to old paintings where the painter has depicted himself - becoming immortal through his own image. By seeing traces of the camera the illusion of the virtual world suddenly becomes unreal. We begin to understand that we only see through the virtual eyes of a certain perspective.