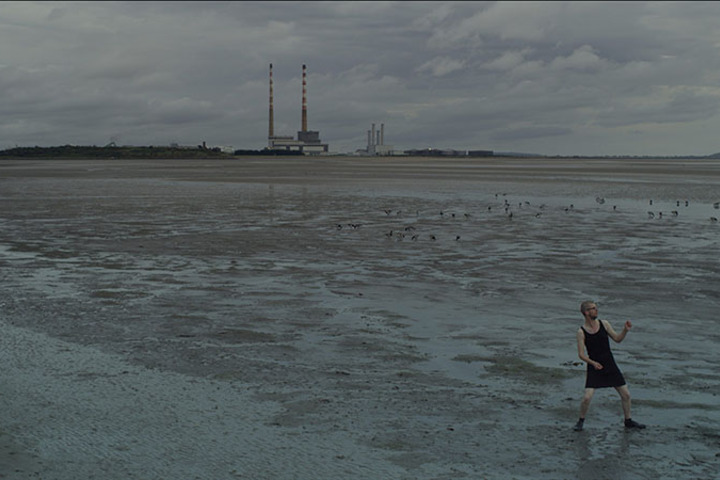 BFCer Donal Foreman's winning Irish feature film, OUT OF HERE, is set to have an online debut January 16th on Vimeo. The film, shot in Dublin, follows Ciaran as he reluctantly returns to his hometown of Dublin, broke and stuck living with his parents. The film is a refreshing exploration of a angsty youth culture told through a lush, patient, and bold lens. Irish and American critics alike have nearly universal praise for the film, calling it "one of the best debut films this country has produced in many years, a film whose reputation will only build as the years go by" and "A picture-perfect framing of a time and place". Not bad.

Donal workshopped a rough cut of Out of Here with us at BFC back in 2013. Below, I asked Donal a few questions in anticipation of his VOD release.

Alex Mallis: First, a little about the film. Can you tell me about its inception?

Donal Foreman: I first conceived of Out of Here when I was an undergrad at the National Film School in Dublin. Since I was a teenager I'd been trying to find ways to make films about growing up in Dublin, exploring experiences that I'd gone through or seen play out in different ways among my peers -- dealing with feelings of alienation, displacement, struggles to express oneself and connect with others... This idea of a college-age Dubliner reluctantly returning home after a year's traveling seemed like the ideal vehicle to take on some of these concerns. I developed the idea over several years after graduation, while honing my skills on a series of shorts, and allowed new ideas and observations to accumulate and "stick" to the central concept until I felt ready to make it as my first feature. The series of shorts definitely served as a kind of training ground for developing my style and how I liked to collaborate with actors. They also ended up being "studies" of some of the ideas and themes of the feature, though that wasn't entirely conscious. Anyway, at that point, I started trying to attach a producer and production company to the project, which was a whole other saga. AM: The film has a meandering quality - and yet that out-of-place feeling comes across exquisitely. How were you able to avoid the pitfalls of exposition while still feeling confident you would get your point across?

DF: For me, in every aspect of filmmaking, from working with actors to designing the visuals, the important principle is embodiment rather than illustration. To take an example: with actors, I encourage them to forget about making themselves understood from the viewer's point of view. Their job is to embody the character in that situation, to commit to and be present to that experience as it unfolds. You've got to have faith that that kind of embodiment and presence is what's going to make the thing compelling. This applies just as much to the way the narrative, imagery and sound is handled. When I see filmmakers or performers straining to be understood at the expense of this kind of honesty, it pains me.

In terms of exposition, my original script and rough assembly of the film had more upfront exposition, and in the editing process I started paring that down, trying to find the right balance between giving you sufficient bearings to engage while still keeping you a little lost and displaced, giving you space to make your own connections and judgements and bring some of your own experiences and emotions to bear on it.

AM: One thing that struck me was your bold camera placement. Your use of master shots allowed me to really explore the frame. And when you did go in for coverage, you seemed to resist the urge to cut. Did you know ahead of time you would rely on master shots, and then, how did you decide what to cover?

DF: I knew I wanted to avoid traditional coverage for the most part. There are exceptions, but often I feel like people fall back on traditional coverage because they don't have any visual ideas of their own. They're not trying to find new ways to see the world, they're just keeping it "covered".

In terms of what was shot, it varied day to day. Some scenes were looser than others and I felt I needed to keep some options open in the edit, so we shot a few angles (though sometimes this would turn out to be unnecessary, and I played the scene in one shot anyway.) Then other scenes I knew it had to be one and that's all we shot.

When I do use shot-reverse shots, I try to be very deliberate with the cutting, because I don't want to fall into the pattern of just cutting back and forth on lines of dialogue, and therefore undermining the rhythm the film has developed so far, as well as the expressive power of the cut itself. AM: You captured great performances with really natural feeling dialogue. Did you script word for word?

DF: The film is more scripted than it looks. We had a workshop rehearsal process prior to shooting and the full script emerged out of that, with a lot of input from the cast. This created an investment and familiarity with the material that paid off on screen. My favorite quote about working with actors is from John Cassavetes: "The director creates an atmosphere and the atmosphere directs the picture."

AM: There's a moment in the film where the main character, Ciaran, perks up at the mention of New York City and I couldn't help being reminded of your own life as a filmmaker here in Brooklyn. Do you ever consider returning to Ireland full time?

DF: Not in the near future. I don't really have any job prospects there - the work I do in New York, as a teaching artist for the Tribeca Film Institute, doesn't really have an equivalent in Ireland - and I find the culture in NYC more inspiring, energizing and motivating at this point in my life. I think making Out of Here might have been a way of saying farewell to the city, in a certain sense. It sums up a time and a mood that I was just moving past when I made it (I was already living in New York for a year when I went back to shoot the film). But I still feel connected to and concerned with Irish culture, and it's definitely something I'm going to return to in my filmmaking.

AM: Besides the premiere on the 16th, what's next?

DF: I have script development funding for two scripts I'm working on, one set in Ireland and one set in New York, and I'm procrastinating by dreaming up a few others. And I'm teaching filmmaking to middle schoolers in New York for the Tribeca Film Institute, so that's keeping me busy as well.

OUT OF HERE premieres January 15th on Vimeo On Demand for rent and download. Check it out here: https://vimeo.com/ondemand/outofhere