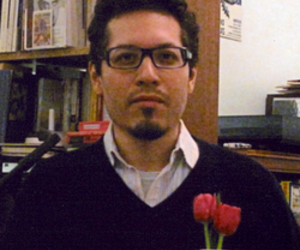 Born and raised in Mexico City, René Peñaloza-Galvan earned an undergraduate degree in Communications at the University of Texas at Austin, majoring in Radio-Television-Film. He later attended Mexico City’s prestigious Centro de Capacitación Cinematográfica film school and earned an MFA degree in Dramatic Writing at NYU’s Tisch School of the Arts.

Rene’s award-winning narrative and documentary short films have screened in festivals all over the world, including South By Southwest Film Festival, the International Film Festival Rotterdam, IESAV in Beirut, the Carrefour de Cinemas Festival in Paris, and the Festival International Images du Nouveau Monde in Québec. His thesis film at CCC, Huevos (Eggs), received a national theatrical release in Mexico.

He was a talented cinematographer, shooting many short films, documentaries, and videos. His work for fellow University of Texas alum Heather Courtney – Los Trabajadores/The Workers (2003) andLetters From the Other Side (2006) – screened on PBS’s Independent Lens and at several film festivals. He also worked as an assistant director and producer on film projects.

Rene’s talents went well beyond the arena of film, and he worked as a journalist for art and music magazines and did translations for publishing houses. He was active as a musician and DJ, playing the jarana jarocha (a guitar-style Mexican instrument) and singing in the band Bachelor Sound Machín. He co-founded El Mirador, a public exhibition space in Mexico City that sought to bring contemporary art to a wider audience.

Rene spent the past several years living in Brooklyn, New York where he taught video production to high school students in an after-school program. He continued to direct short films and his last completed short, “Welcome To The World”, won a finishing grant from the Brooklyn Arts Council.

Rene was a great friend and collaborator to many in New York City, Austin, and Mexico.