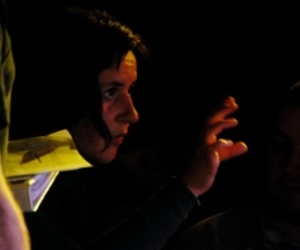 Catherine Tyc’s first music video premiered on MTVu in 2009 and was voted “Best Video of the Week” and nominated for “Best of the Year”. The video was added to the rotation on  LOGO’s NewNowNext as well as MTVu.

In 2006, she was a fellow at the Flaherty Seminar “Creative Demolition: Reconstructing Culture through Innovations in Film & Video” at Vassar College.

In 2009, she adapted, directed, produced and edited her first short narrative “Umbrella” that has gone on to screen in galleries & festivals in Seattle, Portland and New York City , Berlin and London.

In 2008, XLR8R magazine wrote about her work in a article about the Portland video art scene, “ Tyc’s visual depiction of “seeing” sound moves into a realm far deeper than music video, becoming something closer to abstract illusionism.’

Catherine now lives in Brooklyn, NY and works as an editor on various independent film projects and produces non fiction pieces for the web.

She is a member of New York Women in Film and Television.