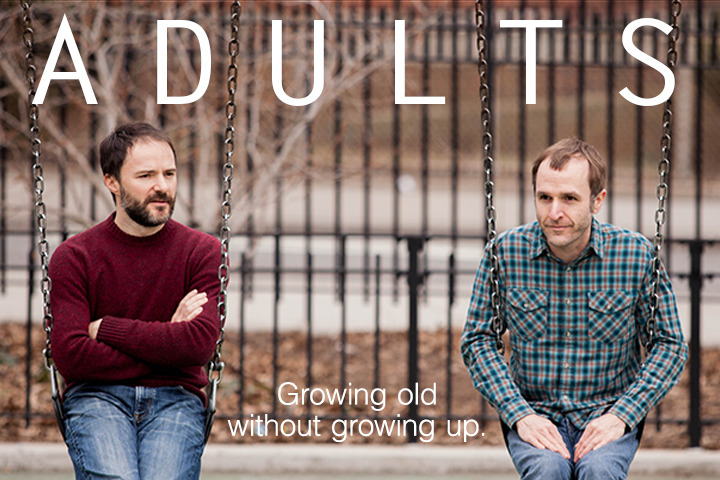 In the summer of 2015, filmmaker Jef Taylor and actor Garrett Neergaard got together with some friends to shoot some improvised scenes in Jef’s Brooklyn apartment. Several months later, Jef screened some rough edits of the scenes for the Brooklyn Filmmakers Collective. Garrett and Jef’s unique on-screen chemistry and improvisational comedy caught the attention of fellow BFC member and producer Chris Casey, and he approached Jef about expanding the concept into an episodic series.

In the coming months, Jef, Chris and Garrett developed the initial rough concept into what would eventually become ADULTS. Jef and Garrett would play two 40-year old friends struggling with the unique challenges and expectations that adulthood presents. In order to maintain the organic feel of the initial concept, the episodes would all be improvised from character sketches and story outlines that were largely based on real-life experiences.

After a successful crowd funding campaign, the team began casting and crewing up for production. Jef and Garrett reprised their roles as the principal characters, Chris joined the cast as an eccentric millennial real estate mogul, and Garrett’s real-life wife – Jennifer Bowen – came on to play his TV wife. Rounding out the cast was Megan Hill as Jef’s would-be blind date and Lucy DeVito as an unexpected brunch guest.

Jef directed all three episodes of ADULTS and tapped his long-time collaborator Ryan Dickie to serve as director of photography. Ryan and his team approached the challenges of an improvised shoot with a naturalistic and minimalist shooting style that makes the audience feel like a fly on the wall of the character’s lives, and brings a uniquely organic feel to the show.

The first three episodes of ADULTS were produced, in part, as a proof-of-concept for a full length second season, which is currently being written by Jef, Chris and Garrett. The critical response to the first season has been overwhelmingly positive, with most viewers asking to see more episodes. The team is excited to take ADULTS to the next level and give the people what they want.