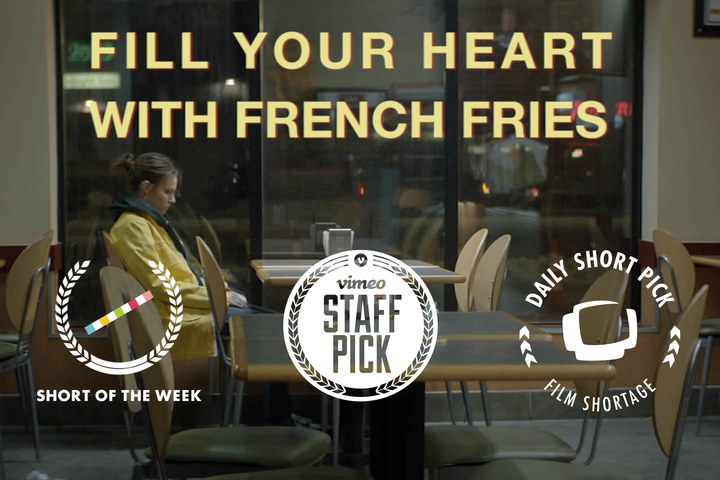 NEW YORK, June 12th 2017 -- Silent Dog Pictures' original comedy short, Fill Your Heart With French Fries, was released to an overwhelmingly positive response from viewers and critics alike. The film follows Emma (Lindsay Burdge) who, after getting dumped by her girlfriend in a fast food restaurant, is so sad she doesn't leave for a week. Directed by Tamar Glezerman (The Other War, Disregarding Gaza), French Fries was inspired by the real life story of a Chinese woman who spent seven days inside a KFC after getting dumped.

The film was released by the female-founded and run online video network The FRONT as part of their ongoing series The Front Presents. Days after it's launch on Vimeoand Facebook the film has garnered over 15,000 views, as well as hundreds of comments, like and shares. It has also been selected by the prestigious short film curation platforms, Film Shortage, Short of the Week and Vimeo Staff Picks.

"We are extremely grateful but not at all surprised by the overwhelmingly positive reaction to French Fries" said Silent Dog Pictures founder Chris Casey. "Ever since we read Tamar's wonderful script we knew this film was special and unique and we're so proud to share it with the world."

Fill Your Heart with French Fries marks the second collaboration between writer/driector Tamar Glezerman and Silent Dog Pictures. The first was the music video for the song Don't Pull Away by J. Views featuring Milosh. Silent Dog Pictures is currently in development with Glezerman on a feature film project to be announced in the fall.

Fill Your Heart with French Fries was workshopped in and produced with the support of the Brooklyn Filmmakers Collective.