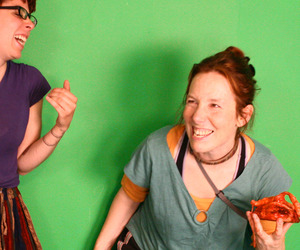 In her work, Israeli born artist Stavit Allweis, explores the continuum between the still and the moving image.

As an MFA graduate student at Columbia her paintings became increasingly narrative. She was soon captured by the magic of sequential art and comics and started producing her works-on-paper in sequential groups.

It wasn't long before she embarked on a self taught journey into directing and began production of ISNESS, a photo-graphic novel.

ISNESS is the story of an epic 24 hours in the life of a post apocalyptic family, situated in the late 1960's. It assembles live action photography with miniature background sets to create a world of it's own. The progress of this ongoing endeavor can be followed on http://www.countercomics.com

Her 2017 short film Cooking with Connie, about a mail order bride in the 1970s, won Best Experimental Film at the Brooklyn Film Festival and Best Director at Austin Arthouse Film Festival. She has just completed her new film EXECUTION. Screenings will be listed here.