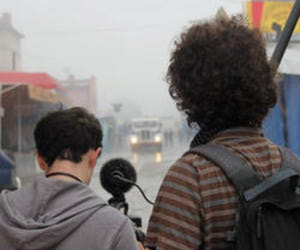 Jay Arthur Sterrenberg is a Canadian American documentary director & editor whose work has appeared in theaters, on HBO, Arte, CNN, ESPN and PBS.

Documentary editing credits include TROPHY (Sundance, 2017), Tribeca award-winning UNTOUCHABLE (2016), NARCO CULTURA (Cinedigm, 2013), Academy Award nominated REDEMPTION (HBO, 2013), Emmy Nominated SECTION 60 (HBO, 2008) and Wartorn: 1861-2010 (HBO) which had it's world premiere inside the Pentagon and is used by the U.S. military to educate soldiers and families about PTSD.

In 2005, Jay co-founded the Meerkat Media Collective, an award winning collective and co-operatively run production company that prioritize shared authorship and skillsharing within their creative process. He edited, photographed and co-directed the collective's two feature length documentary STAGES (New Day Films, 2010) and BRASSLANDS (The Orchard, 2013) which has screened around the world including Rotterdam, Los Angeles Film Festival, and CPH:DOX. His short documentary PUBLIC MONEY is an observed portrait of an experiment in participatory democracy in Meerkat’s home neighborhood of Sunset Park.