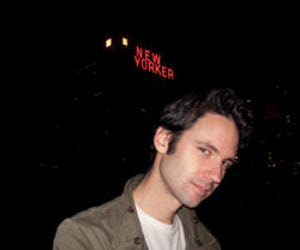 Brad DeCecco lives in Brooklyn, grew up in Boston and photographs subjects around the world. He can often be found shooting rock stars, ranchers and athletes. His photos have been described as "filmic" which is strange as he rarely watches movies. Brad’s environmental portrait work earned him the PDN 30 award for the 30 Best Emerging Photographers of 2007. Photography then led him to the world of film in 2005. Since then he has directed and worked as cinematographer on both documentary and commercial projects. Communication Arts recognized his work with the Jury Prize for Cinematography. Brad’s first foray into music videos, Red, premiered as a selection at Music on Main at the 2008 Sundance Film Festival. His first feature length documentary film, Serpent in the Rock, will premiere in 2012. He is also currently producing a book about the legal brothels of Nevada. Some of his clients include: The New York Times Magazine, Esquire, The Washington Post Magazine, Lexus, Time, BBC, Popular Mechanics, People, Smithsonian, ESPN and Universal Records.