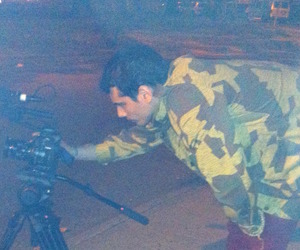 Alexander Kaluzhsky is a filmmaker born in Odessa, Ukraine who immigrated to the Brighton Beach section of Brooklyn in the late 80’s. Under his production company Apropos Films he has produced the features The Missing Person directed by Noah Buschel, starring Academy Award Nominees Michael Shannon and Amy Ryan which premiered at the Sundance Film Festival, named one of IFC’s Top 10 films and nominated for a Gotham Award in 2009; and Weakness written & directed by Michael Melamedoff, starring Bobby Cannavale, Josh Charles, and Lily Rabe, which premiered at the Austin Film Festival in 2010.

As writer/ director he has made the short films- Westbrook recently completed; I.Aria, Arkadya, a winner at Hammertonail.com’s Short Film Contest judged by Sundance’s Mike Plante, and Beast of the Southern Wild writer/director Benh Zeitlin; The Visitors, an experimental short form documentary for which he received the 2010 Blueprint Fellowship and was screened as part of CURRENTS 2013 at the Santa Fe Museum of Art; Bad Moon Rising which premiered at the Cannes Film Festival, and Apropos which played New Filmmakers New York. He has also edited the films Notes on Blue by Moyra Davey, commissioned by the Walker Art Center to commemorate Derek Jarman, and Hemlock Forest for the Biennale de Montreal and BFI London.

As actor he has worked on the films The Taking of Pelham 123 directed by Tony Scott; Solitary Man produced by Steven Soderbergh; You and I directed by Roland Joffe; and the indie The Brightest Star, directed by Maggie Kiley, which premiered at the 2013 Austin Film Festival. He is the co-founder of Honey Ramka, an artist run gallery space in Bushwick, Brooklyn, an active member of the Brooklyn Filmmaker’s Collective, and a professor of Cinema at The New School, Pace University, ICP and within the CUNY College System.